An equal Europe is the best partner for the United States 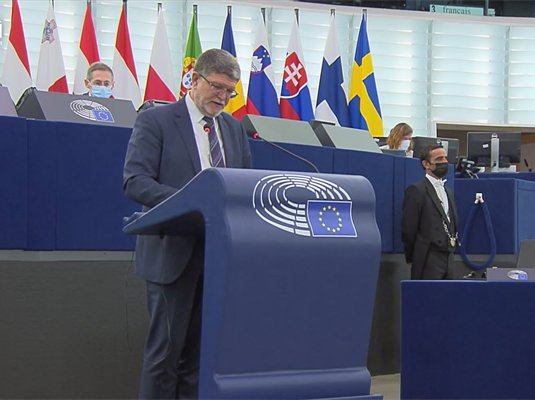 At today’s plenary session, Croatian Member of the European Parliament and EP Rapporteur for Relations with the United States Tonino Picula presented his Report on the Future of EU-US Relations, which was the main topic of debate, emphasizing the importance of transatlantic partners’ equality in international relations

Analyzing transatlantic relations, Picula revealed that he has the impression that it has become a more conscious relationship, leaving a lot of room for cooperation, but also for various challenges, such as trade, data protection and relations with China. But “it is also a relationship dominated by a US focus on the domestic political agenda, sometimes neglecting what is in the interests of the European Union. An example is the recently allowed possibility of traveling without restrictions.”

As for the strength of the European Union, Picula said: “We should not forget all the multilateral achievements and assistance of the United States to the European Union, giving impetus to European development, prosperity and successful integration. We may be a newer community of states, but we are proud of national history and identity. Diversity unites us, and our democratic, social and human rights standards are the most developed, and we should be proud of our leadership in the fight against climate change.”

Speaking about the relationship between the European Union and the United States, Picula said that in the last 75 years, the transatlantic partnership has been synonymous with freedom, democracy, human rights, the rule of law, trade and economic cooperation, as well as security, highlighting the fact that EU and US maintain the strongest bilateral trade relationship in the world. He emphasized that the EU’s strategic autonomy should be achieved with improved implementation of the principles and priorities of European foreign and security policy, while taking into account the EU’s ability to act autonomously and pursue its legitimate interests.

Speaking about the tensions that followed the adoption of the AUKUS trilateral agreement, or the uncoordinated withdrawal from Afghanistan, Picula said we need to better examine divergence points, seeking to improve cooperation, better coordination and the exchange of information and experiences between the US and the EU.

“These events should remind us that the EU must understand the new reality and redefine its relationship with the United States on a more equal basis. It also means advocating for your interests whenever necessary, but also taking on more responsibility. At the same time, we must strengthen the European autonomy of of decision-making, but also of reacting, so that the EU would no longer be soft power, but smart power. In particular, together with the United States, we should work to promote multilateral cooperation for a fairer and healthier world, fight inequality, better cooperate in research and technological development, and promote ecological transformation and peaceful conflict resolution. We need to improve our parliamentary cooperation, rule-based networking strategies, protect and promote democracy and human rights, share best practices and better involve our citizens in decision-making. An equal Europe is the best partner for the United States!” Picula concluded.

"I believe the principle that politics, regardless of it's best intentions, has no right to change people but change the conditions in which they live, for the best"
- Tonino Picula
"Do what you can, with what you have, where you are"
- Theodore Roosevelt
"In my Europe, Croatian producers have my support and their products access to customers"
- Tonino Picula
"Those against every reform is a coward and those for every of it is an adventurer"
- Rufus Kurcije
We use cookies to give you the best online experience. By using our website you agree to our use of cookies.
Accept