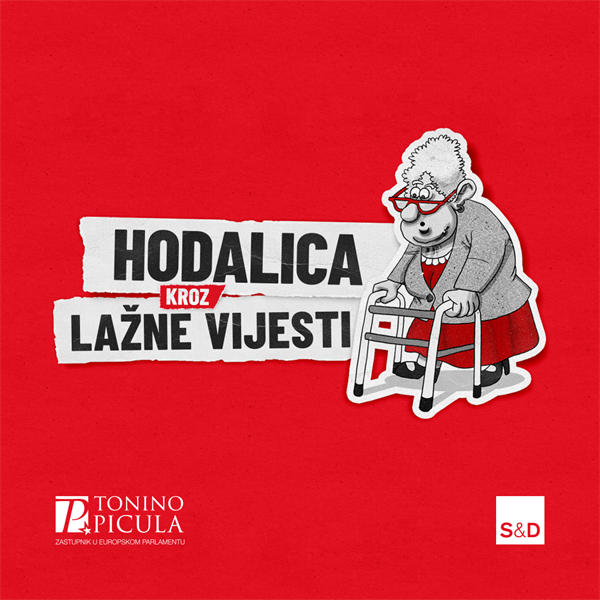 The new project of MEP's Picula office, "Walker through fake news" is a series of lectures with the topic of education on recognizing fake news and misinformation for the elderly

Croatian Member of the European Parliament Tonino Picula, after a successful last year's project and a competition called "Fake News Breaker", aimed at media literacy and the fight against fake news among high school and university students, launched a new project, "Walker through fake news", aimed primarily at the elderly. This is a series of lectures on education on recognizing fake news and misinformation, but also fake advertising, which will be held in six retirement homes in the Republic of Croatia, and a series of five educational films and an accompanying campaign on Facebook.

The project is being implemented with the support of the parliamentary group of the Progressive Alliance of Socialists and Democrats in the European Parliament.

"Elderly people are too often neglected in Croatia, both in the care system and in the media, and the European Parliament in 2008 recognized the importance of media literacy of senior citizens, especially in the digital world, which has become their reality and everyday life", said Picula, who is also a member of the European Parliament's Special Committee on Combating External Interference in Democratic Processes. He added that several relevant studies have shown that the elderly are, unfortunately, most prone to spreading fake news on social media.

For example, the American study by Grinberg et al. (2019) showed a high concentration of fake news consumption in the general population: 1% of users consumed 80% of detected fake news, while only 0.1% were responsible for 80% of shared fake news sources. Research has also suggested that fake news is more likely to be shared by seniors. Similarly, the study of Guess et al. (2019) which focused on Facebook, which found that sharing fake news is a rare occurrence in itself, but that those who participated in the sharing were over 65 years old and that this group shared almost seven times more fake news than the youngest age groups. Although neither study draws definitive conclusions about the causes of the vulnerability of older age groups to fake news, they agree that older people, who came online later, do not have the digital literacy skills that younger users have. In the Eurobarometer survey on online fake news and misinformation from 2018, 83% of respondents stated that fake news threatens democracy (80% in the Republic of Croatia).

Although at the European level respondents perceive traditional media as the most credible news sources (radio 70%, TV 66%, press 63%), in the Republic of Croatia the highest level of trust in video hosting sites was found among all members (Croatia 43%, EU average 27 %) and the second highest according to social networks (Croatia 40%, EU average 26%).

"That's why we decided to come to them, to their homes and conduct live education through this series of lectures, we believe that through interaction it is best to gain new knowledge together," said Picula, who will be at the first lecture on Monday, November 29, 2021. at the Pešćenica Home for the Elderly in Zagreb. Young people will not be forgotten in this project either, so Tonino Picula's office has prepared a competition "Send your grandparents to Brussels", where grandchildren can win a trip to Brussels and visit the European Parliament for themselves and their grandparents.

The project "Walker through fake news" was prepared and implemented in cooperation with media expert Tomislav Levak, mag. cult., lecturer at the Department of Culture, Media and Management of the Academy of Arts and Culture in Osijek. Levak is a doctoral student in communication studies who is completing his doctoral dissertation on disinformation and fake news, and has been holding lectures and media literacy workshops for the elderly for several years.

For this project, Levak has prepared and will hold six lectures and workshops for retirees in five Croatian cities, and together with Dr. sc. Nefreta Zekić Eberhard, a long-time journalist from Osijek specializing in media ethics, participated in creating content for promotional videos and creating campaign messages. Finally, the cartoons "Walkers through Fake News" are signed by Nikola Plečko, better known as Nik Titanik.