The EU needs to redefine relations with the US 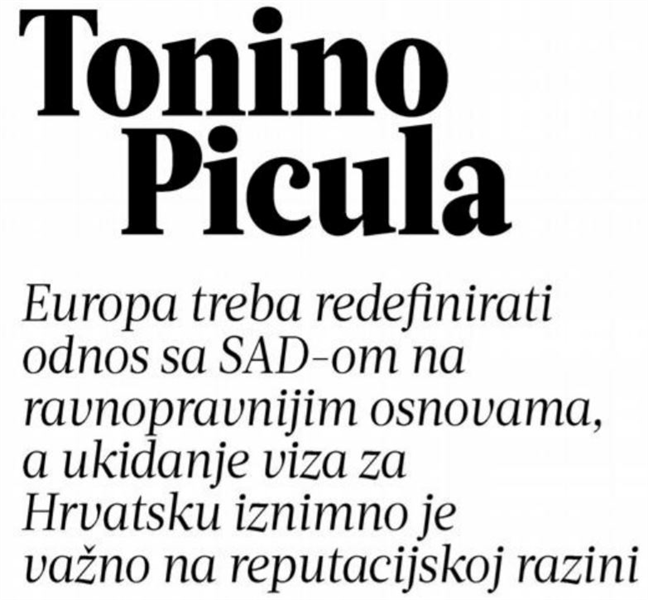 Picula spoke to Vecernji list about EU-US relations, abolition of visas, and also about expectations from Bosnia and Herzegovina

At the end of the week spent in Washington before his report on the future of EU-US relations was discussed at the plenary session in Strasbourg, Tonino Picula spoke with Vecernji list. Below are a few answers.

After the chaotic withdrawal from Afghanistan, and after the new strategic military alliance AUKUS that infuriated France, what is the current state of EU-US relations?

There are many reasons for stating the fact that we are in an inconsistent period of our relationships. Public statements about rebuilding transatlantic relations and better cooperation do not correspond to what we see in the hard field of practical policy. Bismarck once said that the United States is a happy country because to the east and the west it borders - fish. I would say that Americans today rate Pacific fishes as much more interesting to them than Atlantic ones. The way the US withdraw from Afghanistan and concluded a new security agreement with Australia and the UK should serve as a reminder that the EU must finally make its common security and defense policy as serious as, say, monetary policy. We should strive to redefine our relationship with the United States on a more equal footing. However, this also means defending one's own interests whenever necessary, but also taking on much greater responsibility. A strategically autonomous Union would be the best partner for the United States.

In the report on future EU-US relations adopted last July, MEPs expressed hope that the election of President Joe Biden would boost new momentum in bilateral relations and lead to better cooperation between the two powers as equal partners. Is this proving to be an up-and-coming European expectation? Because we see that Biden is still turning America towards the Pacific. Are transatlantic allies still important to America?

The election of Joe Biden has indeed raised high expectations in the EU after four years of continuously collapsing transatlantic relations under Donald Trump. However, there were many who soberly said that global relations began to change even before Trump came to power and that a routine return to the situation before 2016 is not possible. Biden announced that America had returned, but the question was what kind of America had returned under his leadership. The America the EU needs to work with today is, above all, a country deeply concerned with its internal problems, exhausted by the wars in Iraq and Afghanistan, traumatized by the pandemic and seriously politically polarized. Trump left power under dramatic circumstances, but Trumpism is still present. Democrats, on the other hand, have a hard time dealing with their own factions in Congress where they currently have a slim majority. What the Republicans and Democrats have in common, though, is a foreign policy focus on China and attempts to curb its growing influence. Americans generally do not have much patience for those who question their strategic priorities, even if they are the closest allies. But the EU has something to offer the United States when it comes to joint responses to the socio-economic consequences of the pandemic, promoting global health, fighting climate change, fighting global criminal networks, and strengthening digital and green transformation as means of sustainable modernization. It must not be forgotten that the EU and the US have developed one of the world's strongest bilateral relations in trade and investment and are jointly advancing a highly integrated economic relationship.

In Washington, the news that the US government has made a decision to abolish visas for Croatian citizens came as a surprise. What significance does it have?

After years of diplomatic efforts and a demanding process of meeting very strict preconditions, Croatia has become the 40th member of the United States Visa Waiver Program. I raised the issue of achieving visa reciprocity long ago as Minister of Foreign Affairs, and later to all US ambassadors delegated in Brussels since I became a member of the European Parliament. I am really pleased with this important achievement because it will greatly facilitate the path of Croatian citizens to the United States, regardless of the motive for their departure. Namely, the Abolition Program implies a security partnership between the United States and certain countries that aims to facilitate international business and tourist travel, with an emphasis on protecting national security. In order to become a member of this program, states must continuously meet the requirements related to the fight against terrorism, consistent law enforcement, regulation of migrations, document validation, and securing state borders. Also, these truly rigorous conditions require that the visa refusal rate be below three percent and call for close cooperation between the countries involved with US law enforcement and counter-terrorism institutions, which is one of the most important segments. However, this is also a key moment for Croatia and on a reputational level, especially considering that it is not an easy task to satisfy difficult American tasks and checks. In this way, cultural and business experiences will undoubtedly be exchanged more easily and efficiently.

Matthew Palmer, the US envoy for electoral reform in BiH, gave an interview ahead of his arrival in Sarajevo this week in which he said that targeted changes to the BiH Constitution should remove ethnic prefixes from the BiH presidency and House of Peoples elections and it was seen as a shock for all Croatian politicians, from Dragan Covic through Andrej Plenkovic to Zoran Milanovic, and you as an MEP engaged in this "Croatian issue" in BiH. Do you feel like it was a cold shower? And how to solve this issue if Croats do not have the support of Americans or key European partners?

I believe that Mr. Palmer’s attitude reflects the basic fact around which we can all agree - within the Dayton agreement, in Bosnia and Herzegovina evolved a culture of conflict instead a culture of cooperation. The country today serves as an example of a non-functioning system. This kind of system is, before all, a consequence of American pressure in the moment of its establishment. It wouldn’t be effective to replace a deteriorated model with one completely different, but equally inadequate system. More so because president Bident following the debacle in Afghanistan a bit bitterly concluded that the times in which Americans formulated countries all over the world had passed. No agreement, not even the one about electoral reform, and especially the one that would eliminate ethnical prefixes in Bosnia and Herzegovina would be possible. And especially it will not be possible to find a solution without a constructive agreement between political actors in the country.