NATO remains, but the EU must strengthen its defense capabilities 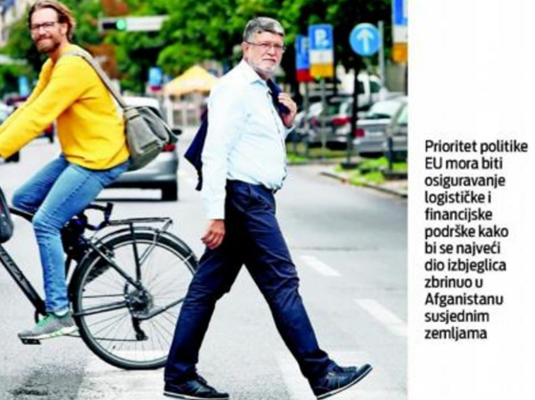 Picula spoke for Saturday’s Vecernji list about the repercussions of the withdrawal from Afghanistan, relations with the United States and the situation in the SDP

In the big interview for Vecernji list, Croatian Member of the European Parliament and Socialist and Democrat Foreign Policy Coordinator, Tonino Picula talked about the situation in Afghanistan, its consequences for US-EU relations, as well as domestic policy issues.

In Afghanistan, there is a race against time considering that the evacuation of the population led by the U.S. lasts until August 31st. What is Your opinion on the fact that the U.S. has refused to negotiate an extension of that deadline?

Extracting a huge number of people and equipment out of a country like Afghanistan would be an extremely complex project even if the US did so in much more favorable conditions, let alone in a chaotic situation after a military defeat. I do not believe that there is a way for European leaders to persuade US President Biden to extend that deadline. The real question is why the United States did not work out a better withdrawal plan with NATO partners, which would be more long-term oriented and more sustainable in order to prevent the humanitarian catastrophe that is, without a doubt, unfolding before our eyes. As the United States planned to leave Afghanistan by 9/11 anyway, it is difficult to understand why this departure was not prepared militarily in terms of security and logistics. Namely, the American media report that there was an intelligence estimate that it would take the Taliban far less than a few months to take control of Kabul and most of the country.

The Taliban promise a softer regime, they call on people to stay in the country, offer amnesty and guarantee rights to women. Given the earlier five-year Taliban regime that lasted until 2001, are Afghans rightly skeptical and what do you expect to happen in that country starting August 31st?

Unfortunately, Afghanistan’s military and political stabilization plan has failed. Some shifts during the country’s twenty years of “resetting” were overemphasized while the context of actual processes was excluded from the analysis. It is unlikely that Afghans can expect anything better from the Taliban regime than they have experienced before: the number of people who want to escape from Kabul, as well as those who have been trying to reach Europe through migrant routes for years, speaks volumes about what they expect from the Taliban. The Taliban 2.0 will adapt its tactics to the changed geopolitical circumstances and to its new ambitions, but it will not give up its rigid system.

Is it possible to avoid a humanitarian catastrophe, and if yes, how? Who will be the most affected by the return of the Taliban?

Immediately after the G7 meeting on Tuesday, the EU announced four times larger financial aid to alleviate the humanitarian catastrophe that is almost impossible to avoid. The presence of European NATO members in Afghanistan and the failure to establish any lasting stability in the country in two decades, that despite all the information about the general corruption that has been squinted at, now commits not to be left stranded by all those who will be in disfavor of the Taliban regime. Women and girls will certainly be most affected.

How do you perceive the way the U.S. withdrew from Afghanistan and literally left chaos behind?

This is a clear defeat of the political West whose geographical remoteness is in reverse relation with its geopolitical sense. President Biden talks about how America has returned. Yes, but what kind of America came back after Trump’s confusing mandate? The withdrawal was clearly decided by US domestic political reasons. The main challenges of the USA can be summarized in: covid, climate, China. Important by-elections for Congress next year await President Biden, where Democrats have a narrow majority. It is clearly estimated that Afghanistan is becoming too heavy a burden for this administration. It is up to the European Union to accept that it needs a redefinition of its own defense and security policy. There is no need to think about abandoning cooperation within NATO after the Afghan failure, but the issue of the common security and defense policy of the European Union is becoming all the more heavy. It is not just a question of allocating funds to the combat readiness of the forces of each member state of the European Union, it is a question of a common attitude towards the threats coming from the countries of the Union's geopolitical rivals.