Montenegro must preserve its credibility 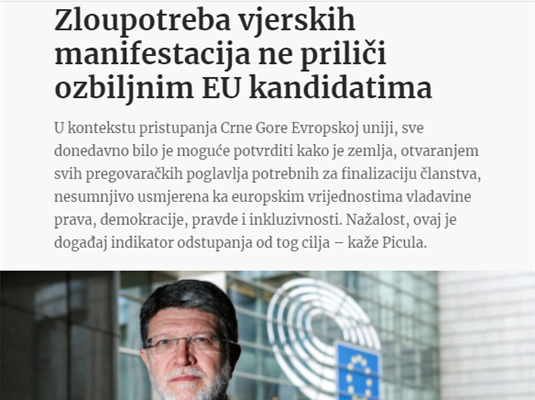 Croatian MEP and European Parliament’s standing rapporteur for relations with Montenegro Tonino Picula gave an interview to the Montenegrin newspaper “Pobjeda” on September 13th, analyzing the causes and consequences of the incidents that accompanied the enthronement of Metropolitan Joaniki as well as Montenegro’s current position in the EU accession negotiations

“The enthronement of Metropolitan Joaniki outgrew the religious character of that event. But it’s not just an isolated case, the riots that accompanied the procession are actually part of a process that, it could be said, has been going on for more than a year. More precisely, since the beginning of the first transition of administration after 30 years. In the meantime, the new governing structure has not been effectively consolidated. The conflict between parts of the ruling coalition too often has a negative influence on the democratic affinities of modern Montenegro. In all this, it is not encouraging that Montenegrin politics, as well as its society, is chronically and worryingly polarized. So, since it is difficult to talk about total compactness of the ruling coalition, finding a sole culprit for these events, which are basically an escalation of unresolved situations, would be possible only with an unbiased insight into the roots of polarization, Picula told in the interview.

Regarding EU accession, Picula explained: “Until recently, it was possible to confirm that the country, by opening all the negotiation chapters needed to finalize membership, is undoubtedly oriented towards European values of the rule of law, democracy, justice and inclusiveness. Unfortunately, this event is an indicator of deviation from that goal. In addition to suffering reputational damage, it has made it more difficult to prove its capacity in the process.”

Picula also claims that “one of the greatest values of Montenegro lies in its multiethnic and multi-confessional figuration and in the long history of peaceful coexistence of people of different beliefs. This is, after all, the premise of the European Union itself. Such heritage should remain a Montenegrin trump card, not a space for self-sabotage.”

Given the many criticisms related to the turbulent situation in Montenegro, Picula believes that “it is an exaggeration to state that Montenegro is currently in a state of anarchy. Given the seriousness of recent events, Montenegro can expect a lot of criticism, both from its own citizens, the media, and from the European and international community, but when assessing the situation in the country, political and analytical restraint should be maintained."

Regarding further development of conditions and involvement of the international community, Picula analyzed: “I hope that conflicts have reached their peak. I think that this incident also represents a difficult lesson and that those responsible will contribute to reducing tensions and initiate dialogue. Certainly, the international community must follow the development of the situation in Montenegro even more closely. These are events that have a significant impact on the policies and processes in which the European Union must have a vital interest. Montenegro, as the candidate country that has made the most progress towards membership, with a proven infrastructure for successful resumption of negotiations and proactive regional cooperation, must not jeopardize this position with regressive internal political dynamics.”

Regarding the possible impacts on the destabilized situation in Montenegro, Picula concluded: “Analyzing the processes in Southeast Europe, it will be necessary to identify who still has a malignant impact in this area burdened with unresolved disputes and democratic deficits. The EU needs to take the sources of instability in our region far more seriously. Not only because of the sustainability of the enlargement policy, but also because of our own future. ”

"Do what you can, with what you have, where you are"
- Theodore Roosevelt
"Those against every reform is a coward and those for every of it is an adventurer"
- Rufus Kurcije
"I believe the principle that politics, regardless of it's best intentions, has no right to change people but change the conditions in which they live, for the best"
- Tonino Picula
"In my Europe, Croatian producers have my support and their products access to customers"
- Tonino Picula
We use cookies to give you the best online experience. By using our website you agree to our use of cookies.
Accept