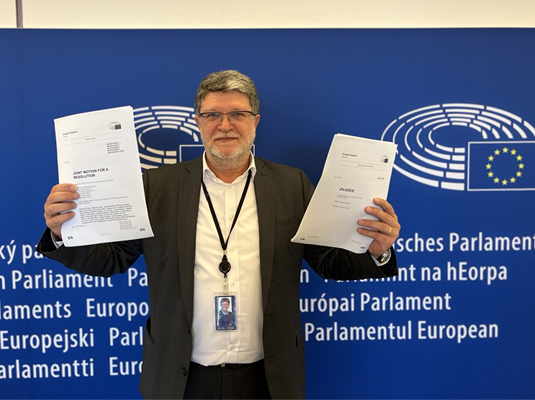 With 506 votes in favor, 50 against, and 35 abstentions, the Report on the progress of Montenegro in 2021 was voted, whose author is Picula as permanent Rapporteur.

Montenegro has advanced the farthest on the European integration path and opened all chapters, and almost 80% of Montenegrin citizens support the country's entry into the EU, Picula reminded during the plenary speech on the Progress Report of Montenegro.

"In order to achieve all that we emphasize as necessary in the report, the obligations are first of all on the authorities in Montenegro to accelerate the pace of fulfilling obligations, because too much time has been spent without progress. We welcome the formation of a new minority government made up of pro-European parties, as well as the election of a new President of the Parliament," said Picula.

The past year to which the Report refers was marked by the political blockade on the internal level and political stagnation on the European path, and Russia's permanent interest in destabilizing the region was additionally expressed in Montenegro, he assessed.

He stated that it is of great importance to welcome Montenegro's continuous and complete alignment with the EU's common foreign and security policy, including EU sanctions against Russia, and its active participation in missions and operations within the EU's common security and defense policy.

In the context of relations between Croatia and Montenegro, the Report calls on the Montenegrin authorities to recognize the tradition and cultural heritage of the Croatian community in Boka Kotor and encourages concrete measures to find and implement final and binding solutions to long-standing bilateral disputes in a constructive and good-neighborly spirit, including border disputes with neighboring countries and issues of demarcation.

Picula concluded the presentation of his report with a reminder to the Commissioner for Enlargement, Oliver Varhelyi, that by the end of his mandate, at least one country in the Western Balkans will conclude negotiations on EU accession.

"I believe that it will be Montenegro," Picula concluded.

With 529 votes for, 45 against, and 14 abstentions, the members of the European Parliament supported the Resolution on granting candidate status to Ukraine and Moldova, on which Picula worked as a negotiator on behalf of the Socialists and Democrats group in the European Parliament, whose coordinator for foreign affairs in the EP.

Speaking in an earlier plenary debate on granting candidate status to Ukraine and Moldova, Picula emphasized that this is a clear sign of European political support and our recognition of the efforts that Ukraine and Moldova have made so far.

"The Russian aggression against Ukraine once again made the expansion of the Union a geopolitical fact and confirmed its value as the most powerful European foreign policy tool," he said, adding that one of the most important lessons from the Russian invasion of Ukraine is that the EU's common security and defense policy cannot to be the weakest link in our integration: "We all agree that Russian aggression deserves the harshest condemnations, and Ukraine, defending itself, defends us as well. European security and foreign policy are inextricably linked, and that is why the enlargement policy is a powerful lever of the Union's security."

Speaking about the enlargement policy itself, Picula said that the Socialists and Democrats in the EP have always been its strong advocates because it is a real engine of positive change, promotion of peace, democracy, and economic progress in our neighborhood. However, it is still important that it is carried out according to clear criteria for membership. The rule of law and democratic reforms must be at the center of the process, he emphasizes.

"In the light of Russian aggression, the policy of enlargement in the Western Balkans gains additional importance. That is why I appeal to the European leaders to start negotiations on the accession of Sj as soon as possible. Macedonia and Albania. Each new delay further damages European credibility and makes the region more vulnerable to foreign influences from our geopolitical rivals," Picula concluded.

"Do what you can, with what you have, where you are"
- Theodore Roosevelt
"I believe the principle that politics, regardless of it's best intentions, has no right to change people but change the conditions in which they live, for the best"
- Tonino Picula
"Those against every reform is a coward and those for every of it is an adventurer"
- Rufus Kurcije
"In my Europe, Croatian producers have my support and their products access to customers"
- Tonino Picula
We use cookies to give you the best online experience. By using our website you agree to our use of cookies.
Accept