Biden will clean up in his backyard first 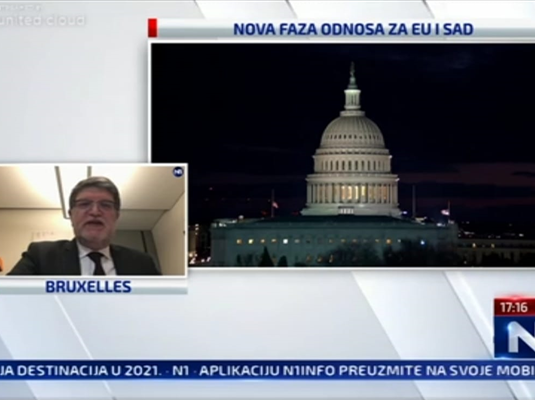 Croatian Member of the European Parliament and EP’s Rapporteur for relations with the USA Tonino Picula commented on N1 television’s Newsroom on the inauguration of new US President Joe Biden and the escalation of the conflict, which was incited by supporters of former President Trump.

In his review, Picula stated that “until the inauguration is concluded, it will cast a shadow on political relations that will shortly require discussion” and added that “the source of this drama is not difficult to personalize, but the deeper roots of American problems will need to be sought more subtly”.

When asked about the EU-US relations, Picula answered: “As far as Europe is concerned, it should be said that it is moving from a minus position because Donald Trump’s administration has been systematically abandoning principles of multilateral cooperation, it has left a number of multilateral agreements and organizations, and Trump himself with his radical unilateralism has led the U.S. into isolation from many traditional American allies, most notably here in the European Union. Therefore, we estimate that Biden's first responsibility will be towards the domestic crisis he inherits, and that his mandate will first be affected by Donald Trump's legacy, and we will see how he sets his priorities."

As for the invasion of the Capitol, Picula said that “it is a galvanized mass of people who are ready for anything at the moment and exceed the usual limits of political action and support for the politician whose agenda they believe in. The big question is what will Donald Trump do after tomorrow. U.S. analysts speculate that it could indeed happen that if Donald Trump does not find sufficient support from the Republican Party establishment, he will leave the party and possibly establish his own political organization. And in that case, the assumption is that he could distract 30 percent of those who traditionally support the Republican Party and thus deal a rather strong blow to the center-right, which would further destabilize the American political scene."

Speaking about the EU's expectations of Biden, Picula recalled that Biden promised that the United States would return under the auspices of the Paris Climate Agreement, hinting that the U.S. would return to the framework of the Iranian nuclear agreement since Biden was in the administration that helped to conclude it. There is no doubt that Biden will bring America back to the World Health Organization as well.

Regarding COVID passports, he reminded that the European Union did not find a common answer to the pandemic question, when we witnessed a sad process when members closed and sometimes banned the export of necessary medical equipment to others who may have been even more affected. As far as vaccination is concerned, the organizational side of the job is underestimated, regardless of the large contingents of vaccines ordered, distribution and vaccination itself do not go at the desired pace. So far, there are too many constitutional - legal problems as far as the so-called covid passports around which there was no consensus, and of course, vaccinations.

"I believe the principle that politics, regardless of it's best intentions, has no right to change people but change the conditions in which they live, for the best"
- Tonino Picula
"In my Europe, Croatian producers have my support and their products access to customers"
- Tonino Picula
"Do what you can, with what you have, where you are"
- Theodore Roosevelt
"Those against every reform is a coward and those for every of it is an adventurer"
- Rufus Kurcije
We use cookies to give you the best online experience. By using our website you agree to our use of cookies.
Accept