Delivering on promises strengthens EU influence in the region 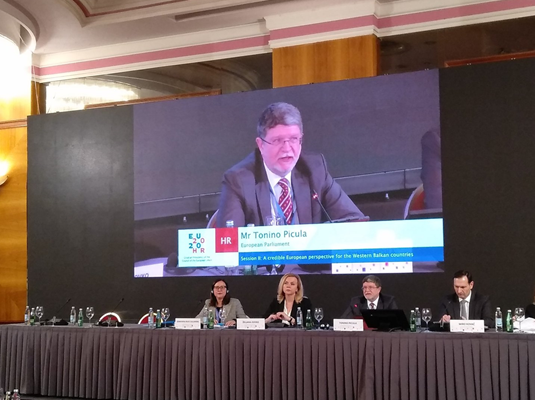 Croatian MEP Tonino Picula gave a speech on Tuesday at the Coneference "A credible European perspective for the Western Balkan countries" held in Zagreb as part of Croatia's EU presidency.

In his multiple role as a Croatian MEP, EP rapporteur for the recommendations for the Zagreb Summit, IPA III and Montenegro, as well as the head of the EP Working Group on the Western Balkans, Picula stressed the importance of the enlargement process. It has upgraded and enriched the EU throughout its history to the same extent the Union has succeeded in doing so in the new Member States.

"Each new wave enlargement was an impetus for the Union to reform, and strengthen joint action in a number of areas that far outstripped the initial idea of economic unification of the six countries after the war devastation. To make the enlargement process credible, as the panel title states itself, it has to deliver results at the Council meeting at the end of this month. This is to say opening the negotiations with Albania and Northern Macedonia. Credibility here means first of all the fulfilment of our commitments once all the preconditions we set have been fulfilled. The inability to make this decision has shaken our credibility in the entire region, and not only in these two countries.” Picula said.

He wondered: "What incentive do we provide for countries to carry out reforms and attaining results if we do not recognize such complex and historic reforms as changing the name of the country? Similarly, we should not forget the abolition of visas for Kosovo which is also in the waiting room, while conditions have been long met. Not underestimating the gravity of the situation, the planned enlargement debate must not be side-lined or skipped over by the COVID-19 virus nor the situation at the Union's external borders. It is precisely the example of the migrant crisis that best remind us of the importance of integrating the 6 countries of the Western Balkan into the Union, and the importance of having coherent policies and actions”.

Read the full speech below:

"A credible enlargement policy is a strategic investment in mutual security and prosperity. As a co-rapporteur for the IPA III Instrument for Pre-Accession Assistance, I would also like to mention the financial dimension of a credible enlargement policy. What we want from the next generation of the Instrument is for IPA III to be based on political priorities that have a direct impact on the lives of citizens, and for pre-accession funds to be allocated in a transparent, proportionate and non-discriminatory way. Equally, we want a better Instrument that will provide adequate and fair pre-accession funding, which should be result-oriented in line with the transformation needs of beneficiaries, helping them fulfil their EU accession obligations.

The  Communication fromt the Commission on the new enlargement methodology is a welcome step, and we now need clear political decisions. First of all, I think it is good that this topic is being discussed a lot again, since enlargement has not been much discussed since Croatia's accession. The new Commission President Ursula v.d. Leyen, High Representative Josep Borrell and Commissioner Oliver Várhelyi stressed that the new Commission would be geopolitical, and the best proof of those intentions would be to act in our closest neighborhood. An improved methodology should have full EU membership as the ultimate goal, and the EU should set clear and predictable rules and criteria, and then apply them consistently. At the same time, we need to improve the accession process by ensuring that it reinforces the Union's core values and achieves sustainable democratic and economic transformation, as well as territorial and social convergence. What I consider crucial to emphasize is that EU's internal reform and its enlargement should be parallel processes that will complement and enhance one another. We need better coherence between the enlargement process and political developments in the EU. Internal political circumstances in any of the Member States should not be a reason to block the whole enlargement process.I consider proposals in the Communication to be positive. For example, that the chapters are grouped by topic and negotiated together. It is extremely important to involve these countries in European programs such as TNT-t or the Green Agreement even before formal accession through targeted financial support. This way we allow concrete benefits for citizens and increase EU assistance and presence in these countries. We should continue to work to implement the Digital Agenda for the Western Balkans and to establish a roaming zone between these countries, as we have done in the EU. Generally speaking, all countries should be judged on individual merit, the measurement of their results should be further improved, and the two already negotiating countries should be able to decide for themselves whether and to what extent they would apply the new methodology. We should make democracy and the rule of law a priority in the enlargement process by opening the chapters on justice, corruption and organized crime, as well as the chapters on respect for human rights and freedom of the media first, and closing them last. In my report, I also call for the inclusion of the Western Balkan countries in the conference on the future of Europe. Without a dialogue on a common future, it is unlikely that the enlargement process will be credible. Finally, I would like to address the parliamentary dimension of the enlargement process, which I consider extremely important, and which is not emphasized in the Commission Communication. The European Parliament needs to play a bigger role in the enlargement process because of its commitment to strengthening democracy in the region, and in order to provide candidates directly with greater support and assistance. Parliament can help overcome political polarization and protracted parliamentary boycotts and increase parliamentary scrutiny. In my report, I call for example for national MPs to get involved in the work of the European Parliament even before the end of the negotiations. I also find it important that the European Parliament is consulted when discussing the suspension of negotiations, and the reversibility of the accession process. An example of a good practice of the EP involvement would be the participation of President Sassoli at the Zagreb summit, as is the case with the regular meetings of the Council in Brussels. Once again, I would like to thank everyone, and I hope that the summit in two months at this same place will through dialogue create a platform for sustainable investment in the Western Balkans and continued political support for the enlargement process in the future, thus ensuring its credibility. "