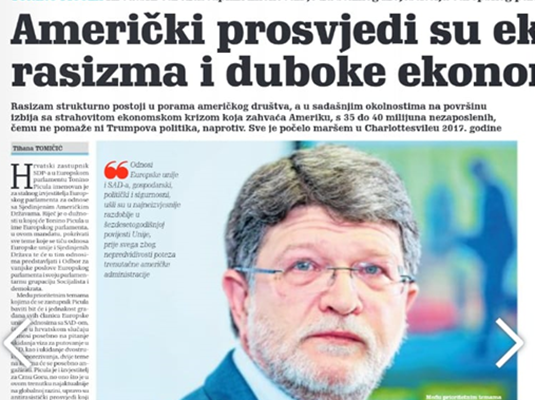 In an interview for Novi list, Croatian Member of the European parliament, and recently elected standing rapporteur for relations with the United States of America, Tonino Picula commented on the current situation in the U.S.

Protests against racial discrimination that have been arising in the U.S. are undoubtedly indicating a general socioeconomic crisis of one of the strongest powers on an international scale. It seems that racism is structurally involved in American society, and in current circumstances, it has erupted on the surface together with a staggering economic crisis in America, counting between 35 to 40 million unemployed, which hasn’t been alleviated by the Trump administration, quite the contrary, Picula declared in the interview for Novi list.

In times of great economic crisis, the first ones to experience issues are the ones that are socially most vulnerable, and now it is showing that in the U.S. these are members of the African American community, who frequently have poorer odds for education, medical care, etc., and it is unfortunately evident that this group is deeply socially deprived, Picula analyzed. He added that America has been immensely damaged during the corona crisis, while President Trump has shown weakness in leadership, which he always thought to be one of his greatest assets, and it is becoming even more clear that isolationist and unilateralist policies cannot serve overall social and global relations well.

Picula concluded that the European Union is currently encompassed with “rings of fire”, which is simultaneously encouraging it to be even more consistent and active in its external relations.

"I believe the principle that politics, regardless of it's best intentions, has no right to change people but change the conditions in which they live, for the best"
- Tonino Picula
"Do what you can, with what you have, where you are"
- Theodore Roosevelt
"Those against every reform is a coward and those for every of it is an adventurer"
- Rufus Kurcije
"In my Europe, Croatian producers have my support and their products access to customers"
- Tonino Picula
We use cookies to give you the best online experience. By using our website you agree to our use of cookies.
Accept