EU encircled by “ring of fire” 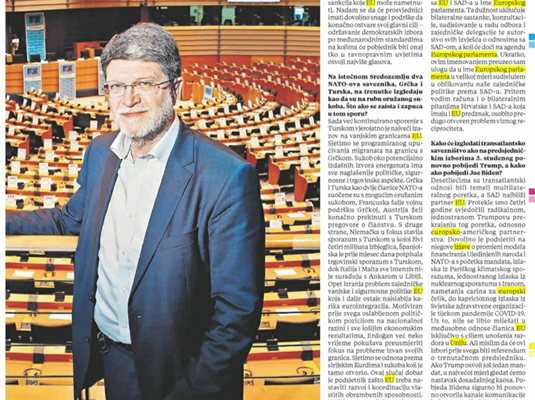 Croatian MEP and standing rapporteur for relations with the USA gave a big interview for Obzor, Saturday’s issue of the daily newspaper Vecernji list, referring to the internal party elections and the foreign policy topics he deals with the most in Brussels.

Considering recent turbulences following the parliamentary elections in Montenegro, Picula deems that a positive attitude towards EU membership as a meeting point for conflicting options should serve as a basis for productive cooperation between Podgorica and the European Union. However, "one should not be naive and assume that the foreign policy orientation of the new government will be completely isolated from the political and interest profile of the dominant fractions of the winning coalition."

Besides instabilities in our neighborhood, recent riots in Belarus are only the latest case in a whole series of regimes in the vicinity that have atrophied during the past ten years, and Lukashenka’s compromised dictatorship and possible downfall depend on the decisiveness and homogeneity of the protesters, degree of loyalty of the regime’s apparatus as much as the readiness of Kremlin to protect its interests in Belarus, Picula analyzed.

As for the ongoing dispute with Turkey, Picula commented that this is probably the biggest challenge at the EU's external borders and that the conflict over potentially abundant energy sources has increasingly noticeable political, security and trade aspects. "The problem of the EU's common foreign and security policy, which remains the weakest link in European integration, is emerging again," Picula concluded.

Finally, Picula also commented on the upcoming US presidential election. “For decades, transatlantic relations have been the foundation of our multilateral order, and the United States have been the EU’s closest partner. Biden’s victory would surely restore the channels of communication that have been obstructed for the past three and a half years. I do not expect a tremendous policy change towards, say, China, but the discourse and narrative will certainly change. On the other hand, I do expect a significantly different approach that would underline the return to the principles of multilateralism and active US participation in global challenges, from the fight against the pandemic and climate change to the development of common security mechanisms”, Tonino Picula concluded.